Men Are from Way Farther Away Than Mars 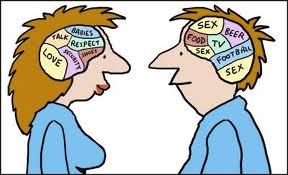 Many  of you probably have read the book Men Are from Mars, Women Are from Venus and many of the rest you have heard things about it if you haven't read it. Well, I didn't write it. But I worked with John Gray for 18 years, wrote workshops and a training based on the Mars Venus stuff and trained over 500 speakers and therapists on how to give those workshops. So I should know about men, right? Well, I know some things about men.

In order to feel loved in a relationship, men need to be trusted. Men need to be accepted the way they are. They don't want you to try to change them. Men want to be appreciated for what they do. They also want to be admired – to be regarded by their partner with "wonder, delight and pleased approval". Men also need encouragement so that they become hopeful and courageous to go out and do what they do all over again – even when it's hard. This is all vintage Mars Venus. You may not agree but the expert says so and the following are how I observe this to be true about the man I lived with for 32 years:

Men need to be trusted. One of the most hurtful things I could do was not trust my husband. When he did his household disappearing act like leave, say nothing to me that he's leaving or where he's going, he was disturbed by my not trusting that if he were going some place for long or really away, he'd tell me. After all, he just went to the car for twenty minutes. I shouldn't be worried that he died somewhere or was captured by other Martians.

Men need to be accepted the way they are. Now I'm a woman and if my husband tells me lovingly that when we are with other people, I sometimes (or often) interrupted him or finished his sentences and we could have a signal so I knew when I was doing it, that's cool. I don't mind. He was right. I don't want to be the person who does that. But in his case, he would rather have had me tell him how what he did affected me and trust that he'd make his own improvements. He didn't want me to tell him what to do or how to do it.

Men want to be appreciated and admired for what they do. My love in the form of appreciation and admiration helped my partner grow from a shy, somewhat timid man, to an outward-going yet quiet type with lots of inner confidence. I know because he told me. I don't think it would have worked this way if it weren't truly authentic on my part. I did admire and appreciate a zillion things about him. It's funny. Admiration alone leaves me feeling a little empty or needing something else. I seem to need his commitment and respect. Those are totally satisfying to my inner self.

Men need encouragement. When my ex- used to come to me for encouragement, I basically wanted to kill him. He was mean and ugly a good deal of the time and then it seemed he wanted me to be a good and kind mother. I wasn't happy about that at all. Whereas when Bart was low, I found it easy most of the time to offer encouragement and, amazingly, it usually worked for him.

John Gray also says men like to go to their caves. This was truer in the beginning of our relationship and I'm grateful I knew "men go to their caves". Maybe the cave changed but it didn't look like it used to. It used to look like hours alone or away. Then it became reading without interruption which seemed to do it for my husband. I'm not sure why it's became different. I have a suspicion that it's because he knew I trusted him to leave the cave and I didn't have to try to break my way in to get him to come out.

If I agree with all this Mars Venus philosophy, why do I say, "Men are from way farther away than Mars"? Because sometimes I could not understand his thinking, his worldview and the way it must be inside the being of a man. For example, I knew my husband for probably 20 years, our relationship had a very high level and amount of communication and he, shockingly, one day revealed that he believed in capital punishment! How can a man who is, like me, peaceful to the point of believing in the possibility of world peace and who is nice and friendly to my ex-, who has liberal views on most anything else still believe in capital punishment?

Another example: say he thinks he's coming down with a cold. He had  lots of sick days. Why did he persist in going to work anyway? It wasn't because he didn't take good care of himself. He exerciseed. He ate healthy. But he would just muscle through until he couldn't stand up any more. And I didn't get martyr vibes from him either. I just don’t get that. If I feel sick, which isn't often nor am I wimpy about it, I lie down. If I muscled through, I would definitely feel like a sacrificial victim. Under those circumstances, I  do what I have to but not a drop more.