My Story - Part 2: As My Journey Began 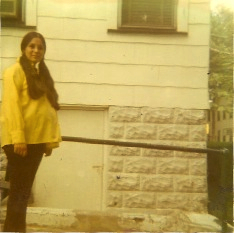 I was sitting on the bed of my soon to be married childhood friend, . Enveloped by my frozen spirit, I begged her for advice. I had been married for seven months and two days. I went steady with my husband for four years starting my second month in college. Living with him was much worse than dating him because I could not run away while he worked on controlling my every thought and deed.

I had escaped from our marriage two weeks before and was staying at my parents' house - the very place I could not wait to leave. I had gone to college to "meet a husband" believing that my parents and society had expected that of me. He was my second date in college. I stopped dating anyone else and stuck with him because I was afraid no one else would want me. Initially his looks and his interest in me drew me in. I also liked the spiritual and optimistic talks we had in the first few months of our relationship.

After that, I felt hooked –and stuck. The unspoken rules I breathed in from my family and Jewish middle-class suburban upbringing were so ingrained in me that I married someone I did not love and with whom I felt very uneasy. However, for me to be acceptable in everyone's eyes, I had to graduate college, become a school teacher and have a baby, in that order –all of which I accomplished with great success, by the age of 23. I believed I had
to do these things even though I felt about him as I did.

My response, "I don't know how I feel. I haven't the foggiest idea who I am.. . You know me better than I know me."

I was so deeply confused that I did not have the vaguest idea what I felt –or who I was.

For a week my husband had been sending me flowers daily because he wanted me back. Flowers did not persuade me. He visited my mother and cried to her and her best friend. My mother surprised me by saying that she supported me in whatever I decided to do. So there was no pressure from my mother.

Then he called my aunt and then my aunt called me. She tried to talk me into taking him back. She ended the conversation by asking, "How would you feel if he died?" Now I knew what I felt. I felt guilty. I hung up the phone and shortly after called my husband and asked him to come to my parents' house to talk. We talked. We decided that it would be a good idea to date again to see where that would lead. But I let him convince me to let him stay at my parents with me that night. We conceived our daughter that evening.

On October 19, 1966 at St. Barnabas Hospital, Livingston N.J., the first of our four children was born.